DEK Realty agents discovered fascinating history about the Fleet Farm in Mancelona while we were were working on the listing for the property. Hopefully, whoever purchases this unique farm will enjoy it as much as the Fleet family has!

This gorgeous farmhouse has three of the original acres remaining, complete with a 3000 square foot series of barns has been in the same builder family for over 85 years! The stories of the Fleet family and how this farm intertwined with the farming community of Mancelona are fascinating.

The house is located on SE Limits and E State Street, and is the first house east of Mancelona Village limits. While it is walking distance to town, the area was originally considered “the country.”

“Back then, business owners lived in town and had large Victorians,” recalled family member Jim Bailey.

Judy and Bruce Fleet
Judy Fleet is the current owner of the Fleet farm. Judy was married to Bruce, who died in 2004. Bruce Fleet was the founder of the Fleet Construction Company and built many homes in Mancelona, including those in the Pleasantview development on the west side of the Village. Bruce was the general contractor in building the Call of the Wild Museum in Gaylord; which was owned and operated by Judy’s family.

The Fleet Farm was originally owned by (Lilliany) Maude Fleet. She gave it to her son Bruce in the 1950’s. When Bruce was around 6 or 7 years old, his father (Sydney) passed away leaving Maude to raise her three boys. The family traveled back and forth from the farm to downstate, where Maude ended up working.

Bruce lived at the farm with his first wife, Eleanor, who died in her early 40’s of a brain tumor. While Eleanor was ill, Mother Maude would often commute from Detroit to help her son. Eleanor left Bruce behind with three children: William, who stayed in the Mancelona area, is now deceased. Bruce’s daughters Diane and Kathy both currently reside downstate.

Farm Stories
The Fleets raised horses, cows, pigs and chickens. The cows they raised were Jersey, Holstein, and Guernsey cows. The cows provided the family with a steady source of milk and meat. The family butchered a cow each year and did all of the processing themselves. It was quite the operation.

Judy Fleet was not raised as a farm girl, and was afraid of the family cows. “Boss was the name of one of our cows, and we called her that for a reason,” she laughed.

Jim Bailey, Bruce Fleet’s nephew, had a harrowing experience with the cows. He remembers hanging out with his cousins at the Fleet farm. One time, the kids were pretending to shoot these cows with a bow and arrow. “The cow got spooked and charged me, and pinned us against the fence,” he laughed.

Jim also described how the kids also dug a six-foot hole on the property, which served as a fort. “We even built bonfires down there.”

Growing Food
Like other families in the area, the Fleets grew much of their own food. They also grew cucumbers and green beans for the market, while others in the area specialized in hay and Walker potatoes.

The Fleet kids picked the green beans and cucumbers and brought the crops to town. There was a Pickle Factory with large barrels of brine for the cucumbers. It was located where the Farmers’ Market now stands 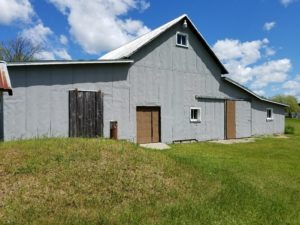 The 3000 square foot outbuilding on the Fleet Farm includes several separate buildings that were used for the animals, their feed, and business materials. There is also an 8′ by 8′ root cellar. Judy’s gardens are really beautiful, with a variety of perennials to show the town.

In addition to the Pickle Factory, there was a Broom Factory, which eventually burned down while the town watched. Many also had memories of the Cheese Factory, which is currently for sale.

Mancelona has lost a lot of its industry, but remains a family friendly town with excellent schools. The Mancelona Historical Society is very active!

Mancelona is centrally located in beautiful northern Michigan, with excellent snowmobiling trails, hunting, and lakes and rivers near by. Shanty Creek Ski and Golf Resort and several other golf courses are also in the area. It has changed a lot over the years, but is still a wonderful places to live!

See the listing for the property.